A guide on getting started with the JoJo’s Bizarre Adventure series, whether you want to read the manga or watch the anime! 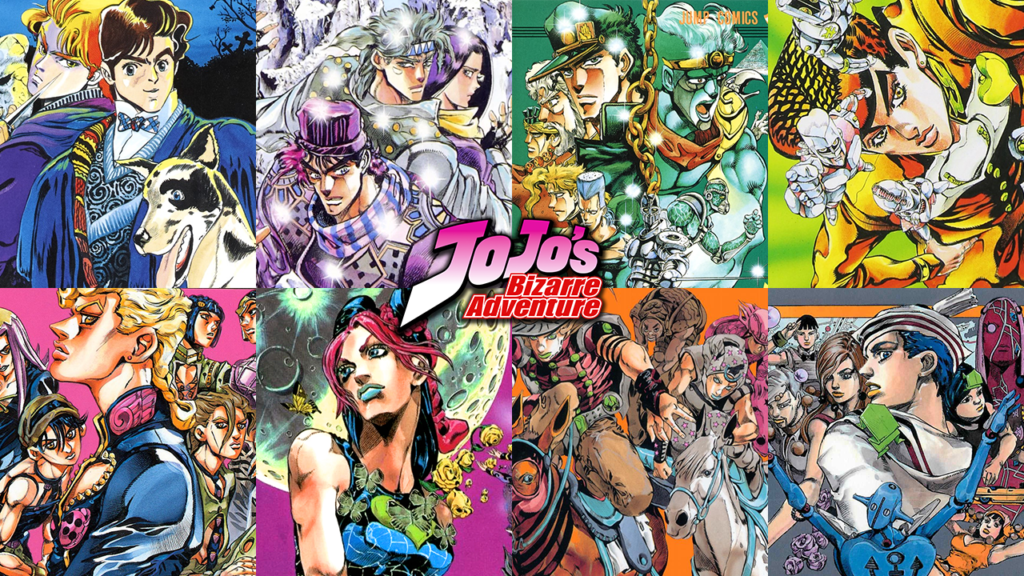 Want to get into JoJo’s Bizarre Adventure but intimidated by the length of the series? Here’s a guide on the viewing order.

Whether you start with the manga or watch the anime is up to you depending on your preference, though I would recommend both.

JoJo’s Bizarre Adventure is a manga written and illustrated by Hirohiko Araki since 1987. It spans eight parts, with the ninth just announced. The anime is made by David Production and started in 2012.

Manga: The series begins on Chapter 1 with Part 1: Phantom Blood. It follows Jonathan Joestar and Dio Brando and takes place in the 1880s. It has 44 chapters.

Anime: The first 9 episodes of Season 1, JoJo’s Bizarre Adventure: The Animation (2012), covers Phantom Blood. The anime has a quick pacing and as a result, several minor details from the manga have been removed.

Manga: Part 2: Battle Tendency begins on Chapter 45. It follows the grandson of Jonathan, Joseph Joestar, and takes place fifty years after Part 1 in 1938-1939. It has 69 chapters.

Manga: Part 3: Stardust Crusaders begins on Chapter 114. It follows the grandson of Joseph, Jotaro Kujo, and takes place approximately fifty years after Part 2 in 1988-1989. It has 152 chapters.

Some sites may split Stardust Crusaders into two seasons, with the second part titled “Battle in Egypt”. Battle in Egypt covers Episodes 25-48 of the season.

Manga: Part 4: Diamond is Unbreakable begins on Chapter 266. It follows the illegitimate son of Joseph, Josuke Higashikata, and takes place ten years after Part 3 in 1999. It has 174 chapters.

Manga: Part 5: Vento Aureo begins on Chapter 440. It follows the illegitimate son of DIO, Giorno Giovanna, and takes place two years after Part 4 in 2001. It has 155 chapters.

For the following parts, the chapter numbers are contained for each part and begin their numbering at Chapter 1 in the volumes.

The following parts are not yet animated.

Manga: Part 7: Steel Ball Run begins on Chapter 1 (753). It follows Johnny Joestar and Gyro Zeppeli, taking place in 1890 in another universe. It has 95 chapters.

During Part 7, the manga switched magazines to Ultra Jump and became monthly. As a result, each chapter is much longer.

Manga: Part 9: JOJOLANDS is currently being planned. It has not released yet.

Craving more? There are several spin-offs related to the series.

Thus Spoke Kishibe Rohan is a spin-off series created by Araki, featuring Rohan. The series has random episode numbers but does not have to be read in the order of the numbers. The order listed below is based on the release dates and the order in the volumes. However, it does not really matter what order you read these spin-offs in. All of them take place several years after Part 4 (Diamond is Unbreakable).

Episode 16: At a Confessional

One-Shot: Episode 16: At a Confessional was the first Thus Spoke Kishibe Rohan spin-off, released in 1997.

OVA: An OVA adapting the one-shot released on March 25, 2020. It added extra scenes which makes it take place in between Part 4: Diamond is Unbreakable and Part 5: Vento Aureo.

One-Shot: Kishibe Rohan Meets Gucci does not have the Thus Spoke Kishibe Rohan title in its name, but is contained in the second volume of TSKR in this order. The spin-off itself released in 2011.

One-Shot: Episode 8: Deoxyribonucleic Acid was the seventh Thus Spoke Kishibe Rohan spin-off released, in 2017. It was originally titled as Episode 9: D.N.A but changed in the volume.

One-Shot: Episode 9: The Run was the eighth Thus Spoke Kishibe Rohan spin-off released, in 2018. It was originally titled as Episode 10: The Run but changed in the volume.

There are other one-shots written by Araki that fans do not consider as canon because of events that occur in their stories.

Rohan at the Louvre

One-Shot: Rohan at the Louvre features a young Rohan Kishibe from Part 4: Diamond is Unbreakable. It is a one-shot manga written by Araki and released in 2010. Some events in the story contradict canon events, such as how Rohan got his Stand.

One-Shot: Jolyne, Fly High with GUCCI is a one-shot that released in 2012. It features Jolyne Cujoh as the protagonist along with some characters from Part 5. The characters do not have the same roles as they had in the main series and it is set in its own continuity.

Spin-Offs By Other Manga Artists

Manga: Crazy Diamond’s Demonic Heartbreak is a manga starring Josuke Higashikata and Hol Horse which takes place in March 1999 and started releasing on December 2021. It was written by Kouhei Kadono and illustrated by Tasuku Karasuma. This story takes place after Part 3: Stardust Crusaders and before Part 4: Diamond is Unbreakable.

It is currently ongoing and being serialized monthly.

One-Shot: Fujiko’s Bizarre Worldly Wisdom -Whitesnake’s Miscalculation- is a one-shot by Sho Aimoto that released on December 2021. It features Jolyne Cujoh meeting with an artist named Fujiko Fujiyama whose ability can control the mental state of others. It takes place in the middle of Part 6: Stone Ocean around Chapter 40 (Episode 10).

There are several light novels related to JoJo that are not written by Araki but he has illustrated covers and some images for them. The order you read these in are completely optional. These have not been officially released in English but most have fan translations available, excluding rey infinito and Iggy the Stray Dog.

JoJo’s Bizarre Adventure (subtitled Genesis of Universe in the Italian release) is the first light novel related to JoJo. It released in 1993. It takes place during Part 3: Stardust Crusaders.

The Book: JoJo’s Bizarre Adventure 4th Another Day is the third light novel related to JoJo, released in 2007. It is a sequel to Part 4: Diamond is Unbreakable.

Purple Haze Feedback is the fourth light novel related to JoJo, released in 2011. It is a sequel to Part 5: Vento Aureo, featuring Pannacotta Fugo as the protagonist.

JoJo’s Bizarre Adventure Over Heaven is the fifth light novel related to JoJo, released in 2011. The book is written and presented as the lost transcript of DIO’s Diary from Part 6: Stone Ocean.

JORGE JOESTAR is the sixth light novel related to JoJo, released in 2012. The book features numerous characters from Parts 1-7, mainly focusing on George Joestar II, Lisa Lisa, and Jorge Joestar (a character from the 37th universe in the novel).

Iggy the Stray Dog is the seventh light novel related to JoJo, released in 2022. It takes place before Part 3: Stardust Crusaders, starring Iggy and Muhammad Avdol.

JoJo was also adapted by other companies in the forms of OVAs and films. These are optional to watch.

Phantom Blood is a film produced by Studio A.P.P.P. adapting the first part of the series. Unfortunately, it was never released to home video after its limited theatrical release. However, there are some videos of it on our wiki page.

There are two OVA series by Studio A.P.P.P which adapt Part 3: Stardust Crusaders. In total, it is 13 episodes with lots of cuts and changes to the source material.

There is a live-action film adapting Part 4: Diamond is Unbreakable. It covers up to the fight against Keicho Nijimura.

There is a live-action TV Drama adapting Thus Spoke Kishibe Rohan. It has 6 episodes so far.