The Road to STONE OCEAN event by Netflix on November 8 revealed the release date for JoJo’s Bizarre Adventure: Stone Ocean. 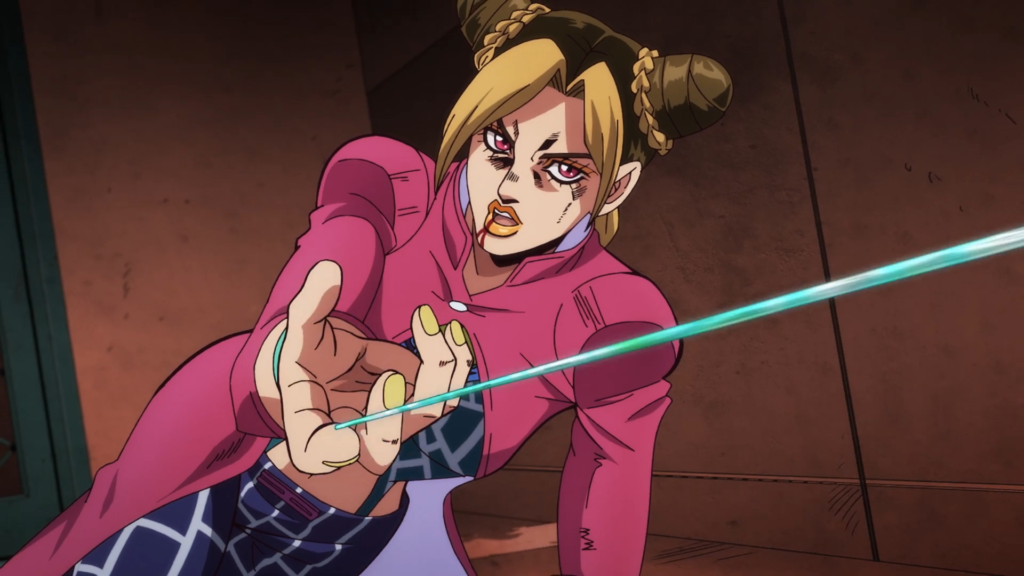 The Road to STONE OCEAN event which was part of Netflix Festival Japan 2021 on November 8 revealed the date that JoJo’s Bizarre Adventure: Stone Ocean would be added to Netflix.

The event featured a musical performance by Yugo Kanno, who was the composer of the JoJo anime since the second season onward. Afterwards, the voice actors for Jolyne Cujoh, Ermes Costello, and Foo Fighters discussed the series. Fairouz Ai, Mutsumi Tamura, and Mariya Ise talked about their characters, their roles behind the scenes, and the type of Stand they would like to have.

Netflix concluded the JoJo segment by announcing that the fifth season will be available for streaming worldwide on Wednesday December 1, 2021. They will release a batch of 12 episodes at once. The official anime account on Twitter also announced that the weekly TV broadcasts in Japan starting with Episode 1 would begin on Friday January 7, 2022.

Ise mentioned that she can’t wait to see how the story will end because of the fans who were curious as to how the conflicts with DIO, a villain in ”Phantom Blood” and ”Stardust Crusaders”, will settle in ”Stone Ocean”. She also pointed out that the main character of the series, Jolyne Cujoh, is the daughter of a character whose presence had been vital in the prior parts, and that she is no exception from having the masculinity of the main JoJo just like with the previous main protagonists.

“I thought all the previous ”JoJo’s” main characters were all strong and masculine,” she said. “Jolyne, [Jotaro’s] daughter, is no exception. The story unfolds around her. It’s also exciting to watch all sorts of battles within the prison.”

When asked to describe F.F. in one kanji, Ise said that the kanji for knowledge (知), as in wisdom/intelligence (智), would be the best way to describe her. She said that despite having few keywords to describe the character, F.F. still used her newly acquired knowledge and experience to help Jolyne and Ermes throughout their journey, displaying her knowledge as a core attribute.

“‘How impressive’ that you chose that kanji!” Fairouz commented, to which Tamura joyfully said that she understood the reference (referring to the brats in Phantom Blood complimenting Dio after he kissed Erina). According to the cast, Fairouz would often make subtle JoJo references behind the scenes, which eventually made her gesture a “thumbs up” hand sign every time she made a reference.

Prior to ”Stone Ocean”, Ise had also auditioned for the previous seasons of ”JoJo’s Bizarre Adventure”. She said that if she were to be involved with JoJo, she thought that ”Stone Ocean” was her final chance, given that there were many female characters in the story. She also added that whenever she wanted to get a role that she wanted to play, she would refrain from rewarding herself until she got casted.

“It’s like a charm,” she said. “For example, let’s say I want to buy a shirt. I won’t buy it until I got the role. I make wishes like that. Once I get the role, I start to buy things I want and reward myself. Until then, I solely focus on that role.”

Ise also added that she would practice lines from the manga in her home to make herself believe that the role is already hers, as well as to get into the character and their feelings.

One of the ”Stone Ocean” characters that Ise likes is Weather Report. She found his “fluffy white hat-like thing” charming, making him a cool and cute character at the same time. Fairouz also added that Weather Report is a mysterious character, having unexpected connections to some of the characters in the story, and that some of his lines connect the dots as the story progresses.

Ise says that if she were to have a Stand, she would want to use it to punish evil in the name of justice. For this, Fairouz, their “Stand coordinator” recommended Killer Queen, the Stand of Part 4 villain Yoshikage Kira, as her Stand because of its ability to track down a target’s body heat and explode around its vicinity after turning the target into a bomb.

On her opinions about the story, Tamura found the prison setting of ”Stone Ocean” interesting. True to the theme of ”JoJo’s Bizarre Adventure”, she said that both the trailer and the opening were “bizarre” from the start, and that she even wondered if Jolyne was really the main character because of her first lines.

Tamura said that the kanji for compassion (情) would be the most fitting to describe Ermes because of her willingness to help Jolyne despite not having met each other until the beginning of the story.

“She’s very compassionate. Though Ermes had never met Jolyne until this series, she helps Jolyne because they became friends,” she explained. “She was convicted [to prison] partially because of her compassion. She’s such a wonderful character.”

Because of this, Tamura knew that she had to audition for the ”Stone Ocean” anime no matter what, to the point that she would repeatedly ask her agent if there was already an adaptation of the manga. As soon as auditions opened up, she immediately applied to have a role in the anime.

One of Tamura’s favorite characters is “the first eccentric person that Ermes encounters in prison after Jolyne”. Although they were asked not to reveal too much about the story, she mentioned that not only did she find the character’s crazed personality awesome, but also the voice actor for the role for his amazing acting. She also added that the episode which this character first appears is also the director’s favorite episode.

Although she found the concept of Stands being too complex, she said that if she were to have a Stand, she would want it to be used for health. For this, Fairouz recommended Pearl Jam, the Stand of Tonio Trussardi in Part 4, because of its ability to heal people through cooked meals.

Fairouz’s impression of the story had been rooted to the first time that she had read the series, which was in her second year of junior high school. According to her, she mistakenly bought the first five volumes of ”Stone Ocean” thinking that it was the beginning of ”JoJo’s Bizarre Adventure”. Despite this, her curiosity for Jolyne prompted her to save up her allowance for collecting the manga volumes beginning from ”Phantom Blood”, and eventually caught up to ”Stone Ocean” around the end of her freshman year of high school.

“After I finished the series, I thought: ‘my impression of Jolyne was right!’ She’s so cool and noble. I really looked up to her,” Fairouz said.

To describe Jolyne in one kanji, she said that the kanji for love (愛) suited her the most because all of the character’s actions stemmed from love, including her resolving strength and conviction.

“She is full of love!” Fairouz said. “Jolyne’s conviction stems from her love. The root of her ever-evolving strength is also love. ‘Love equals understanding!'” she jokingly exclaimed, suddenly putting out a thumb to her fellow cast members to indicate that she was making a JoJo reference. Although the phrase never appears in the series, she explained that it was in a banner of a manga. “Stone Ocean‘s banner phrases were popular among fans.”

Fairouz jokingly proclaims herself to be a “Jolyne otaku”. During her audition for the role, she tied her hair into buns and even brought a ”Stone Ocean” clear folder with pictures of Jolyne and Jotaro Kujo for display in order to impress and show her love for JoJo to the casting directors. Despite her cheerfulness during the audition, she nearly cried while nervously showing her ”Stone Ocean” clear folder to the directors.

“The moment I walked in to introduce myself, I started tearing up. But I still cheerfully said, ‘I’m Fairouz Ai! I love Jolyne! My outfit is inspired by Jolyne! Thank you for having me today!’ and held up my folder in the air. I’m on the verge of tears thinking back on it. […] I looked like an ordinary fan,” she narrated.

Tamura playfully commented that her action was a double-edged sword, saying that they could have failed her then. “They could have thought that you’re a little odd! Some directors like to cast people who aren’t familiar with the original [source material].”

Fairouz’s favorite ”JoJo’s Bizarre Adventure” character is Jotaro Kujo. “For fans who’ve been following the series since ”Stardust Crusaders”, can you imagine Jotaro as a father? He becomes more and more dandy.” She also loved his fatherly love for Jolyne as well as their bittersweet relationship.

Lastly, she said that if she were to have a Stand, she would prefer Crazy Diamond and Khnum. Crazy Diamond, main protagonist Josuke Higashikata’s Stand in the fourth part of the series, would be the most useful to her because of its versatility and its ability to fix broken things and heal anyone. With Khnum, Part 3 character Oingo’s Stand, she would want to play tricks with people because of its ability to disguise the user as anyone by changing the height, weight, voice, smell, etc.

To end the program, the cast told the viewers to watch the anime when it comes out on December 1 in Netflix.

“As you saw, we had lots of fun during the recording. I hope you can feel the fun we had and our love towards the series as you watch ”Stone Ocean”. Go check it out on December!” Ise said.

Tamura also agreed with Ise. “All the cast members have wonderful voices, with Fai-chan as the leading voice actress. […] Even the voice actors/actresses who have not been announced yet have [strong personalities]. Their acting is just superb. I’m sure you will enjoy the show.”

Fairouz finally closed the program with a final message expressing her and the cast’s love for ”JoJo’s Bizarre Adventure”. “I put my love and life into playing Jolyne Cujoh. During recording, we put our heart and soul into the series, so much so that you can almost see the words “boom” in the background.” She also said that she knew fans are eager to see the anime’s interpretation of the Stands. “I know we will live up to your expectations. We hope you’re as excited as we are for the premiere!”

Since the previous trailer, Emporio’s design has been updated to remove the references to the Chicago Cubs baseball team. His outfit no longer has the logos on his hat or shirt.

Previously, we published a post revealing the opening, ending, episode list, and Pucci’s voice actor. It’s been updated now with the latest information. Check it out here.

For the latest updates on Stone Ocean, see our wiki page and the official website.