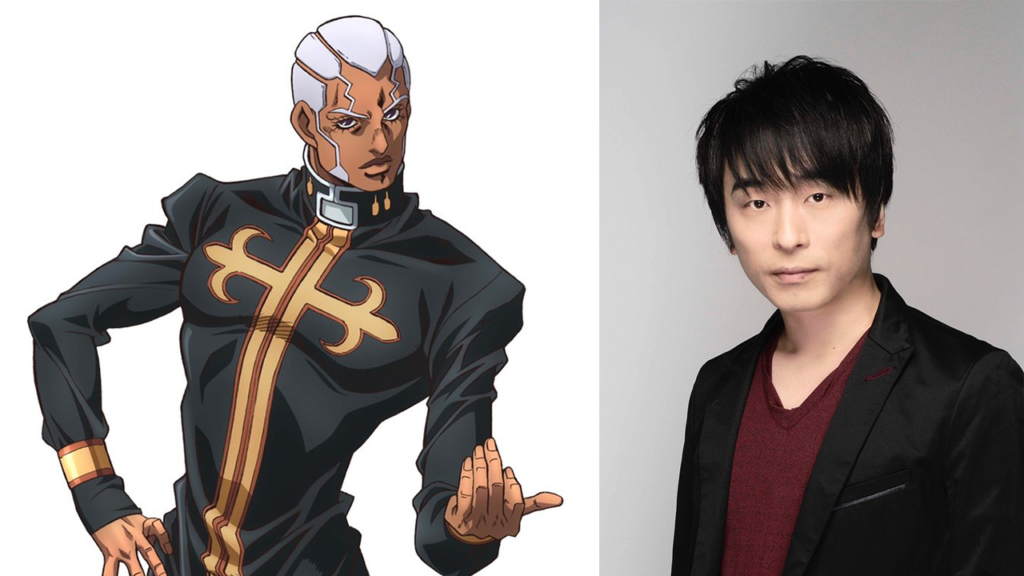 Enrico Pucci is the main antagonist of Part 6. He is a chaplain at The Green Dolphin Street Prison who stands against the Joestar family as the worst villain following DIO’s will.

Some of Seki’s popular roles include Rob Lucci from One Piece, Domon Kasshu from Mobile Fighter G Gundam, Gilgamesh from Fate/stay night, Kanji Tatsumi from Persona 4, Hashida Itaru (Daru) from Steins;Gate, Panda from Jujutsu Kaisen, Sanemi Shinazugawa from Demon Slayer: Kimetsu no Yaiba, and Hadlar from Dragon Quest: The Adventure of Dai (2020).

Sho Hayami previously voiced Enrico Pucci in the PS3 game JoJo’s Bizarre Adventure: All Star Battle, but went on to voice Vanilla Ice in the Stardust Crusaders anime. Jouji Nakata voiced him in the PS3 and PS4 game Eyes of Heaven. Although many fans wanted Nakata to reprise his role in the anime, Nakata tweeted in 2018 that he thinks someone younger should get the role.

Tomokazu Seki has been a longtime fan of JoJo, having expressed his excitement during the announcement of the anime adaptation of Diamond is Unbreakable in 2015. He had also auditioned for a role in the previous seasons of JoJo’s Bizarre Adventure, but never got a part.

During the November 28 event, Seki made a dramatic entrance. He arrived on set an hour early just to record the scene. Seki also stated that he did extensive research on Pucci to play his role.

For more info on Seki, check out his wiki page. More details of everything known about the anime so far can be read in our roundup post.