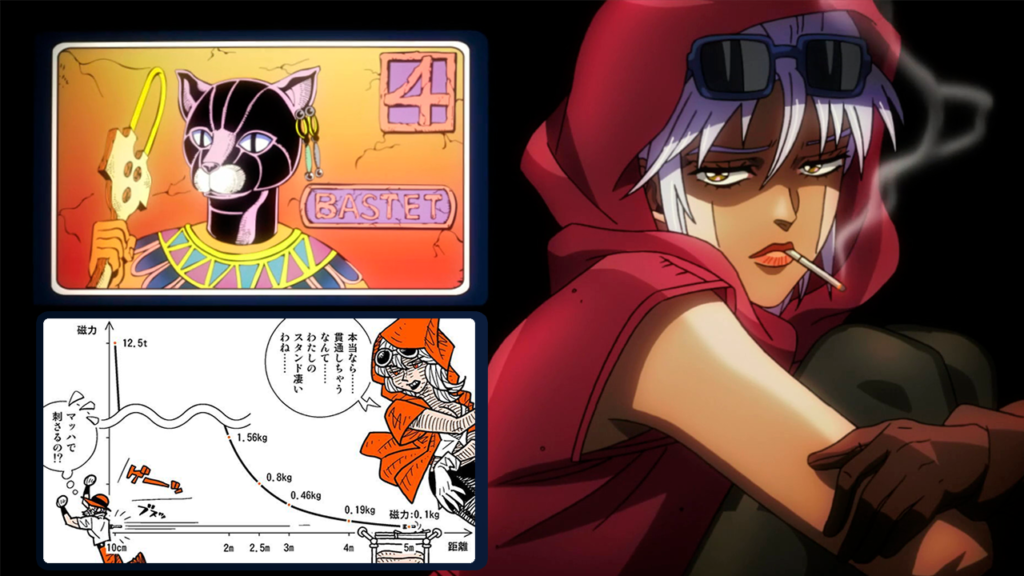 Japanese researcher Rikao Yanagita from the Dream-Science Laboratory posted a research report on Yahoo! Japan discussing how horrifying it would be in real life if a human body was turned into a magnet. Mariah is a subordinate of DIO from the third part of the JoJo’s Bizarre Adventure series, Stardust Crusaders. Her Stand ability, Bastet, takes the form of an electrical outlet, shocking whoever touches it and magnetizing their body.

Can a Human Body Become a Magnet?

In his report, Yanagita first asks whether it’s possible for a human being to become a magnet. Joseph Joestar and Muhammad Avdol fell victim to this ability in the manga, attracting knives, forks, hammers, bicycles, and even vehicles toward them. People may believe that magnets only attract iron or certain types of metal, but in reality, any material can react to magnets in some way. There are three types of reactions and a material can belong to either one of the following:

The reason why all matter reacts to magnets is because each atom that makes up matter has the potential to be magnetic by nature. Atoms are normally oriented in different directions so they do not have magnetic force as a whole, but using magnets can change the orientation of atoms in any material. When many atoms are oriented in the same direction, the material becomes magnetic. Therefore, if Mariah’s Bastet has the power to align the atoms of anything that touches it and orients them to be in the same direction, then it’s definitely possible for a human body to become a magnet.

The Amazing Speed of Magnetism

Yanagita goes on to discuss how the speed of iron colliding with a magnet is tremendous, and if a human were to become a magnet strong enough to attract distant iron items toward them, they’d be in a dire situation. This is due to the nature of magnetic force. While the forces of gravity and static electricity are inversely proportional to the “square of the distance,” magnetic force is inversely proportional to the “cube of the distance”. Thus, if the distance is reduced by a factor of ten, gravity becomes 100 times greater, but the magnetic force becomes 1,000 times greater.

Based on this fact, Yanagita examines the scene in the manga where knives and forks fly toward Joseph. There were eight knives and forks that flew into the air. Six of them went straight into the wall, but two pierced Joseph’s back.

However, thinking about the damage scientifically, it would be a lot scarier in real life than in the manga.

It’s Scarier Than the Manga!

Not to mention after the knife and fork impale through the body, they will magnetically come back and continue stabbing through Joseph’s body over and over again.

Mariah is terrifying. No matter how good her legs are, let’s stay away from such a Stand user.

Rikao Yanagita dropped out from studying science at the University of Tokyo to become a full-time cram school teacher in 1991. In 1995, Yanagita wrote “The Fantasy Science Reader,” which applied scientific-sounding explanations to famous science fiction and fantasy characters. It became a national bestseller selling over 600,000 copies and Yanagita has made the book into a popular series since then.

Yanagita established the Dream-Science Laboratory in 1999. Nowadays, it receives over 10,000 questions a year. He has examined more than 1,000 manga, anime, games, and folktales, and actively posts videos on his YouTube channel KUSOLAB. Yanagita is also a concurrent lecturer at the Faculty of Science and Engineering in Meiji University.

One of the books he’s written is “The Science of Attack on Titan“, which has been published in English.