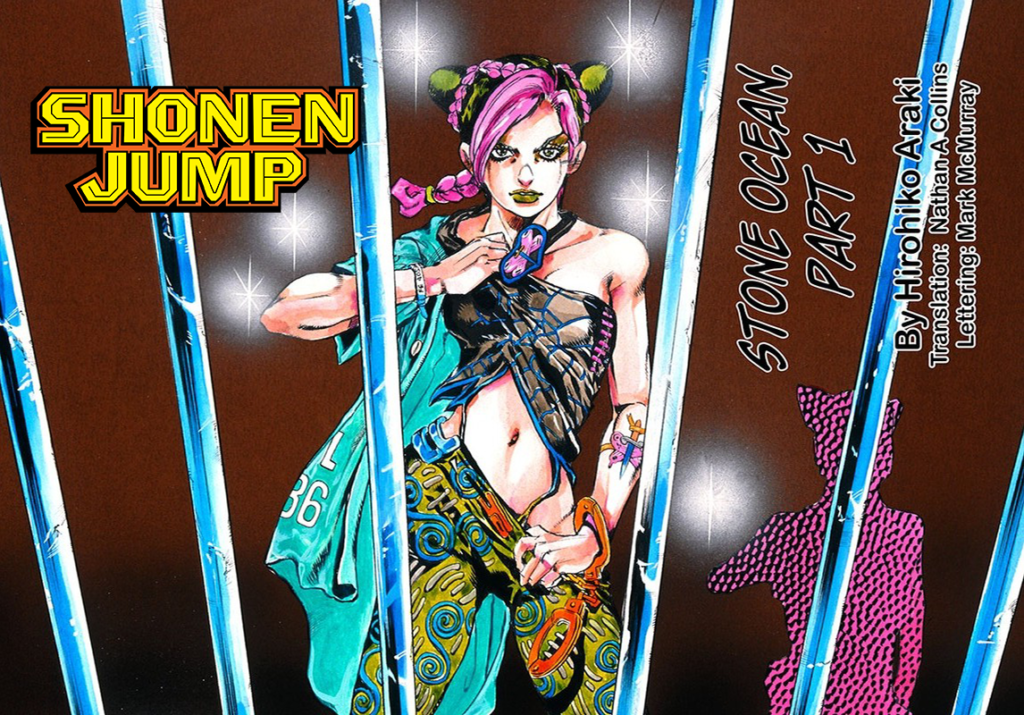 On January 25, 2022, VIZ Media digitally released the first eight chapters of JoJo’s Bizarre Adventure: Stone Ocean in English on Shonen Jump’s digital vault. The first and last three chapters are available for free, whereas the remaining require a Shonen Jump membership for $1.99 a month. These chapters are available for anyone living in the U.S., Canada, the United Kingdom, Ireland, New Zealand, Australia, South Africa, the Philippines, Singapore, and India.

New chapters will be added to the vault weekly. Nathan A. Collins is the translator of Stone Ocean with lettering by Mark McMurray. Collins has translated the JoJo series since Part 4, Diamond is Unbreakable, whereas McMurray has been the letterer for all six parts by VIZ so far.

JoJo’s Bizarre Adventure: Stone Ocean does not have an English physical release at the moment. Presently, VIZ is releasing the fifth part, Golden Wind, both digitally and physically. The third volume will be releasing on February 1, 2022.

Stone Ocean is the sixth part of the JoJo’s Bizarre Adventure series, written and illustrated by Hirohiko Araki from 1999 to 2003. Set in 2011, Florida, Jolyne Cujoh, daughter of Jotaro, is sentenced to fifteen years in prison for a crime she didn’t commit. Part 6 currently has an anime adaptation in progress. Twelve episodes aired on Netflix on December 1, 2021 and it is now airing weekly on TV in Japan as of January 7, 2022.

Shonen Jump’s digital vault is a website and app that allows you to read up to 100 chapters per day with a membership. Members are granted access to over 15,000 chapters of a wide variety of manga, such as One Piece, My Hero Academia, Naruto, Bleach, Dragon Ball, and JoJo’s Bizarre Adventure. Membership costs $1.99 a month, allowing users to read every chapter of a manga in the vault. However, those without a membership can still read the first and last three chapters of a manga for free.