Ultra Jump releases a set of hoodies featuring exclusive artwork by Hirohiko Araki to commemorate the 35th anniversary of the series. 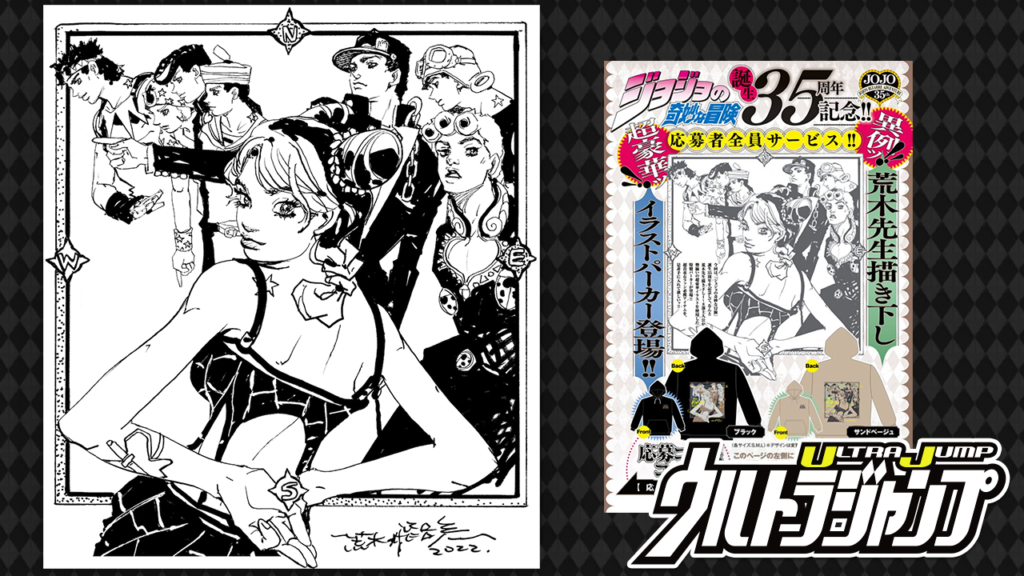 The new artwork will be printed exclusively on a set of Ultra Jump hoodies that will come in two variants, black and beige. Those who have purchased the September 2022 issue of the magazine can apply to receive one of the hoodies by paying an additional ¥5,000 after it releases on August 19, 2022. The application deadline for receiving the hoodie is September 15, 2022.

The hoodie includes a square illustration on the back by Araki featuring all eight main protagonists of the JoJo’s Bizarre Adventure series, with Jolyne Cujoh front and center. The hoodie also features the logo for the 35th Anniversary of the series on the front.

Ultra Jump is a Japanese monthly seinen manga magazine published by Shueisha under the “Jump” line of magazines.

Originally, the magazine was a special issue of Weekly Young Jump which was first issued in 1995. On October 19, 1999, the special issue became the new monthly publication Ultra Jump. The manga titles serialized in the magazine are also published in tankobon volumes under the Young Jump Comics Ultra label.

Having transferred to the magazine from Weekly Shonen Jump in 2004, JoJo’s Bizarre Adventure has become one of Ultra Jump’s most featured titles.