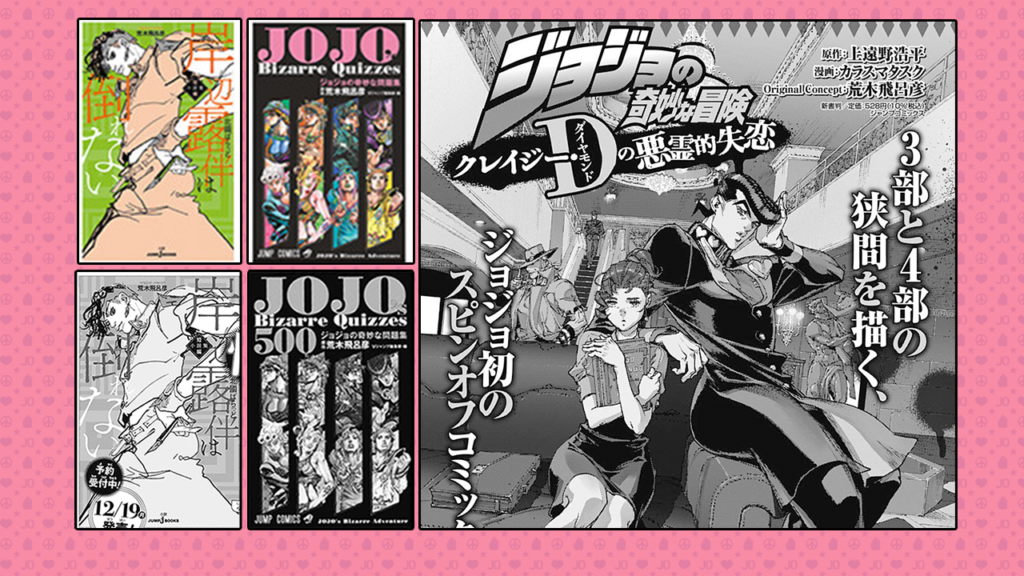 The December 2022 issue of Ultra Jump that released on November 17, 2022 in Japan reveals a preview of the covers for several books releasing on December 19, 2022. The second volume for Crazy Diamond’s Demonic Heartbreak, third volume for the Thus Spoke Kishibe Rohan: Short Stories Collection, and JOJO’s Bizarre Quizzes 500 will all be releasing on the same day alongside JOJO Magazine 2022 WINTER.

The cover for the second volume of CDDH features Josuke Higashikata and Ryoko Kakyoin sitting on a couch. Ryoko is holding Tohth in her hands. Hol Horse stands behind them. On the opposite side is the “Abduction of Persephone” statue. Kazuki Karaiya is visible in the background, descending an escalator.

Volume 2 will cost 528 Japanese yen and most likely includes Chapters 6-10 of the series.

Furthermore, Crazy Diamond’s Demonic Heartbreak will be featured on the cover in the January 2023 issue of Ultra Jump, releasing on December 19, 2022 as well. It will also have a lead color page in the chapter.

Crazy Diamond’s Demonic Heartbreak (CDDH) is a spin-off manga of JoJo’s Bizarre Adventure, written by Kouhei Kadono and illustrated by Tasuku Karasuma. It takes place one month prior to Part 4 of JoJo and stars Hol Horse and Josuke Higashikata. Hol Horse and Boingo search for a missing parrot with a Stand ability that ended up in Morioh. Meanwhile, the cousin of Noriaki Kakyoin wants to learn the truth of what happened to him 10 years ago in Egypt. The first volume released on June 17, 2022.

The third volume of the Thus Spoke Kishibe Rohan: Short Story Collection is titled “Rohan Kishibe Does Not Fall” (岸辺露伴は倒れない 短編小説集). It includes Golden Melody, Original Author Rohan Kishibe, and a brand new story titled “The Five-Bedroom House With A…” (5LDK○○つき), in which Rohan encounters a house where residents evaporate every June. Ballad Kitaguni is the author of all three stories and the volume will cost 946 Japanese yen.

The cover depicts a new sketch of Rohan by Hirohiko Araki with a light green background.

JOJO’s Bizarre Quizzes 500 is published by V Jump and will cost 990 yen. It contains 500 questions to test the knowledge of JoJo fans.

The quiz book includes Parts 1-8 of the series. Its cover features all eight Joestars with reused artwork.

The book will contain all of the answers.

JOJO’s Bizarre Quizzes 500 will additionally include a special talk between Kendo Kobayashi and Fairouz Ai. Kobayashi is a Japanese comedian and actor who has been in several JoJo events. He went on a pilgrimage tour around the world with fellow comedian Kunihiro Kawashima to follow the path of the Joestar Group in Stardust Crusaders. The TV program titled Kendo Kobayashi & Yaseibakudan Cookie’s JoJo Journey started airing on April 27, 2019. Kobayashi was also a guest in the All-Star Battle and Eyes of Heaven tournaments.

Fairouz Ai is the voice actress for Jolyne Cujoh in the anime adaptation of Stone Ocean. 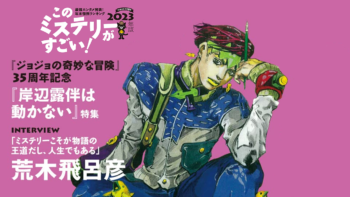 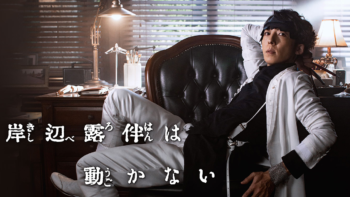