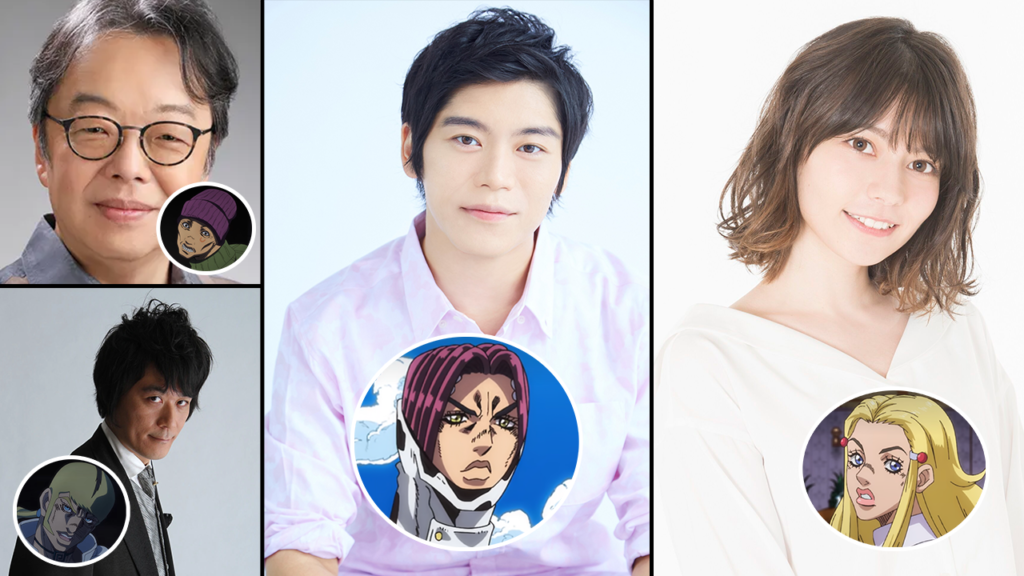 This post contains spoilers for the episodes, so read with caution unless you have read the manga or watched the episodes already.

Takumi Yamazaki (山崎 たくみ) voices Ungalo, one of DIO’s illegitimate sons and the Stand user of Bohemian Rhapsody (Bohemian Ecstatic in the localization). Ungalo is a drug addict whose Stand can bring out fictional characters into reality.

Makoto Furukawa (古川 慎) voices Rikiel, another illegitimate son of DIO and the Stand user of Sky High (Sky Guy in the localization). Rikiel is a man who initially lacks confidence and frequently has panic attacks. His Stand controls organisms known as skyfishes or rods, which can absorb body heat.

Makoto Furukawa is well-known for voicing Miyuki Shirogane in Kaguya-sama: Love is War, Saitama in One-Punch Man, Benimaru in That Time I Got Reincarnated as a Slime, Ogun in Fire Force, and Taiju in Dr. Stone.

Takanori Hoshino (星野 貴紀) voices Donatello Versus, also one of DIO’s illegitimate sons and the Stand user of Under World (Netherworld in the localization). Donatello is a man with a grudge against society after being abandoned and unjustly imprisoned. His Stand allows him to unearth memories from the ground, forcing others to relive historical events that happened in a location.

Takanori Hoshino is well-known for voicing Van in Gun x Sword, Jack Atlas in Yu☆Gi☆Oh! 5D’s, Katsuya Serizawa in Mob Psycho 100, Nobuyuki Kai in Haikyuu!!, and Iori Yagami in The King of Fighters.

Lynn voices Perla Pucci, the younger sister of Enrico Pucci and Wes Blumarine. Perla falls in love with Wes, unaware that they are both related. This relationship drags conflict into their lives, as her eldest brother attempts to split them apart.

Lynn is well-known for voicing Sakura Yamauchi in Let Me Eat Your Pancreas, Atsushi Nakajima in Bungo Stray Dogs, Mafuyu Kirisu in We Never Learn, Gilda in The Promised Neverland, Fuuka Akitsuki in Fuuka, and Hibana in Fire Force.