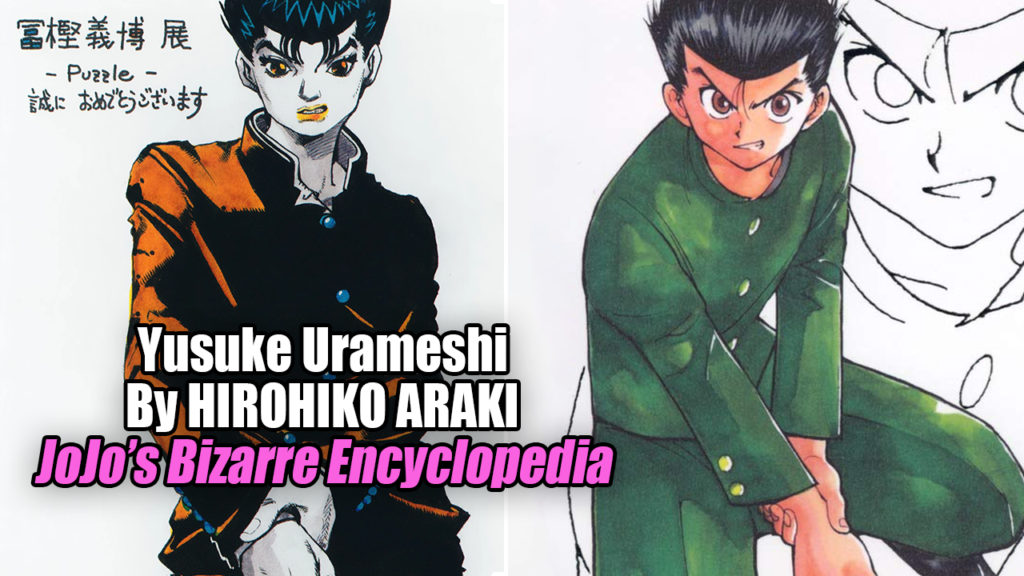 In commemoration of Yoshihiro Togashi’s 35th anniversary as a manga artist, the Weekly Shonen Jump Editorial Department is holding the “EXHIBITION TOGASHI YOSHIHIRO -PUZZLE-” in Japan from October 28, 2022 to January 9, 2023. To congratulate him, famous manga artists commented on the exhibition along with an illustration.

Hirohiko Araki, manga artist of JoJo’s Bizarre Adventure, drew the protagonist of Yu Yu Hakusho, Yusuke Urameshi. Yusuke poses while holding his hand, with his index finger pointed like when he does his signature move, Spirit Gun.

In my way of thinking, a hero is usually drawn as a far-off, idealistic figure. On the other hand, the heroes that Togashi-sensei draws are truly like friends right by your side. Or like a big brother who’s close to you, it’s realistic. I thought, “These are the best characters that I’ve read.” I’m filled with great pride that we were able to write within Shonen Jump during the same period.

“EXHIBITION TOGASHI YOSHIHIRO -PUZZLE-”, I celebrate you from the bottom of my heart. Congratulations.

Togashi’s Yu Yu Hakusho and Araki’s fourth part of JoJo’s Bizarre Adventure, Diamond is Unbreakable, were serialized together in Weekly Shonen Jump at the same time. Yu Yu Hakusho ran from December 1990 to July 1994, whereas Diamond is Unbreakable ran from May 1992 to December 1995. Fans often compared Josuke to Yusuke and Okuyasu to Kuwabara, so it’s fitting that Araki chose to draw Yusuke.

Other Comments and Guest Art

Eiichiro Oda, manga artist of One Piece, drew the protagonist of Hunter × Hunter, Gon Freecss. Monkey D. Luffy and Tony Tony Chopper are beside him.

Sui Ishida, manga artist of Tokyo Ghoul, drew two illustrations. In one them, he also drew Hisoka Morow from Hunter × Hunter. Ishida previously drew a spin-off one-shot manga titled “Hisoka’s Past” in June 2016, so it’s fitting that he decided to draw the character again. Ishida posted his art on Twitter as well.

Yoshihiro Togashi is a Japanese manga artist, known for creating Yu Yu Hakusho, Level E, and Hunter × Hunter. He was born on April 27, 1966, and is married to Naoko Takeuchi, the author of Sailor Moon.

Hunter × Hunter is currently ongoing but often goes on hiatus due to Togashi’s back and hip problems. It just resumed last week after a hiatus of nearly 4 years.