The main voice actor cast of Phantom Blood in JoJo’s Bizarre Adventure: The Animation comment on the anime’s tenth anniversary. 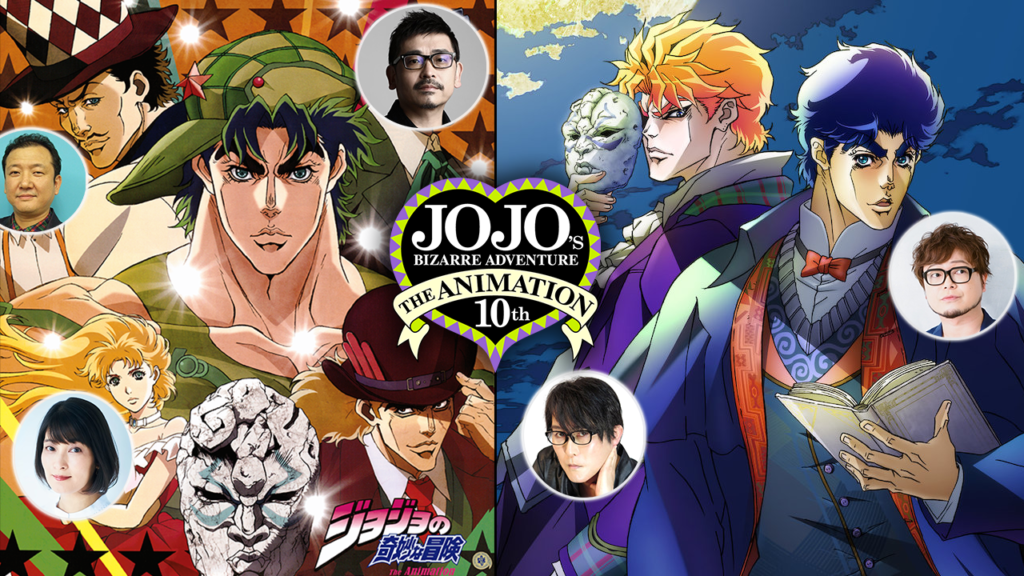 In commemoration of the tenth anniversary for JoJo’s Bizarre Adventure‘s anime adaptation, the main cast of Phantom Blood celebrated by reminiscing on the series.

Ten years have passed since I voiced Jonathan and encountered Dio. However, it seems like it was only yesterday. I feel that the story has been spun to this point because of the desire, power, and passion of the staff, cast, and everyone who supported us.

And I’m thankful for the bizarre twist of fate that led me to play the man known as Jonathan Joestar. WHOAAAA!!

Yoku Shioya as Will A. Zeppeli

“For the 10th Anniversary of JoJo’s Bizarre Adventure“

I love cooking, so I’ve been watching “What Did You Eat Yesterday?” and the main characters are like Jonathan and Speedwagon. The mom reminds me of Erina. I thought about who I always wanted to eat with. I would get eaten by Dio and Speedwagon would probably be noisily reporting on whatever he eats, so it’d be best to have a drink of red wine with Ms. Erina at a cheap pub.

– Baron Will A. Zeppeli

It was a little over 10 years after I began working that I came across the JoJo TV version. My prime as a voice actor began with the words “Hey, Tattoo! I’ll leave it to you!”. It was a work that I poured my energy into for the past 10 years and swept through with all my might.

The flames of passion are still burning in Araki-sensei and many others who were destined to come across JoJo. Until next time, this is where I’ll withdraw coolly.

It’s already been 10 years since Phantom Blood…! I still remember the enthusiasm in the studio back then. Both the staff and cast members created Phantom Blood with a tremendous amount of passion. I am very honored that this love of JoJo continues even now and that I was able to be a part of its beginning.

Congratulations on the 10th anniversary.

Not only is JoJo the most important work of the actor Takehito Koyasu, I can say that Dio/DIO has become the core of my existence.

As long as Takehito Koyasu exists, and as long as the spirit of Dio/DIO exists, I will continue to perform to the best of my ability. At least, please allow me to do so.

I believe that the world of JoJo will still continue, so please stay with me until the soul disappears. Thank you for your continued support.

Phantom Blood is the first part of the JoJo’s Bizarre Adventure series. The manga was serialized in Weekly Shonen Jump from December 1986 to October 1987.

The story follows Jonathan Joestar as he matures with and eventually battles his adoptive brother, the cunning and merciless Dio Brando.

An anime adaptation of JoJo’s Bizarre Adventure released starting from October 2012. Phantom Blood is covered in the first 9 episodes of Season 1.