A 2018 interview between SPUR magazine and Hirohiko Araki, taking a look at four of the most iconic heroines to appear in JoJo. 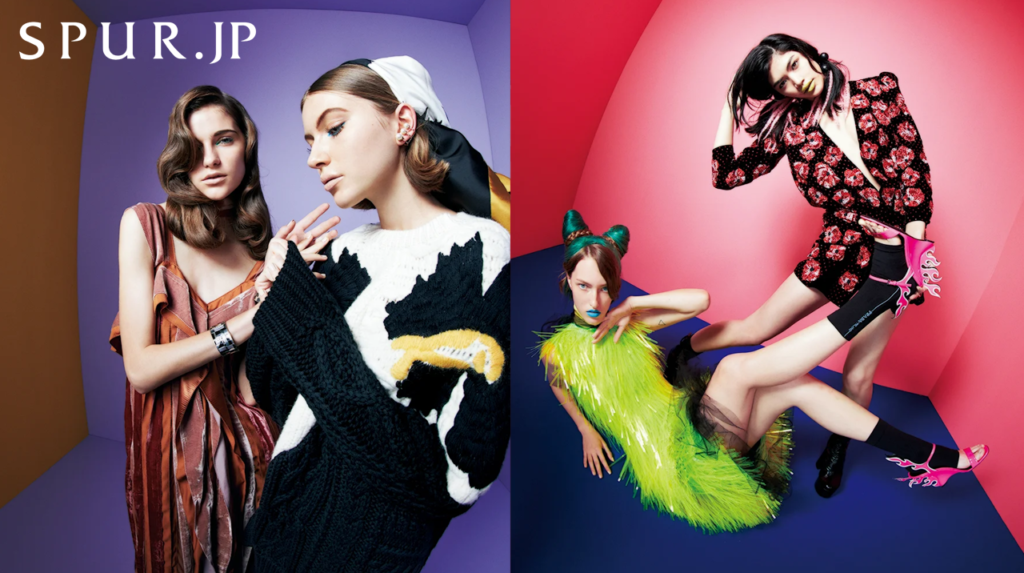 SPUR is a monthly women’s fashion magazine published by Shueisha. It was first released in 1989, and has since had many collaborations with Hirohiko Araki and JoJo’s Bizarre Adventure.

In 2011, SPUR released their first collaboration for the one-shot Kishibe Rohan Meets Gucci, and in 2012 they released the art book JOJOmenon for the 25th anniversary of the series.

Their second collaboration, Jolyne, Fly High with GUCCI, was released in 2013 and featured many iconic characters from the series, including Jolyne and Bucciarati.

On August 23, 2018, an interview between SPUR and Hirohiko Araki was published in the October issue of the magazine. It discusses femininity and fashion within JoJo, as well as taking a look at four of the most iconic heroines in the series.

The female characters in the manga JoJo’s Bizarre Adventure are what makes it so interesting!

They’re so stylish that it’s almost out of this world.

With the theme this time being “JoJo’s Bizarre Heroines”, I’d like to explore the charm of the female characters that appear in the JoJo series. Are there any worries or concerns you have when drawing female characters?

No, not really. I don’t distinguish between men and women like that. When it comes down to it I think I’m more concerned about whether I make them stylish or cute. I’m not very good at the “cute” part, so I often focus on drawing them stylish instead.

The definition of stylish is pretty broad, but in my opinion, it’s someone who’s a loner. Although society doesn’t recognize them, they’re still able to maintain a strong sense of justice. That’s what makes a hero/heroine. They’re so stylish that it’s almost out of this world.

On the previous page, there’s a photo shoot with the likes of four of your female characters, Erina, Suzi Q, Jolyne, and Yasuho. If you could best describe each of these characters with a single word, what would it be?

If I were to contrast these four, Erina would obviously be the most honest, Suzi Q would be joyful and a bit ditzy, Jolyne would stand out as tough and hardy, and Yasuho would be the most modern of the bunch.

Which of these characters do you have the most fondness for?

From these few, I’d have to say Yasuho, since I like drawing her the most. I never get sick of drawing Yasuho, which is why I like her. (Laughs)

But, what about Jolyne? She was the first female protagonist in the series.

Of course, I’ll always have a place in my heart for Jolyne. It was thanks to her that I was finally able to depict violent scenes, such as women getting punched in the face, and people having their arms cut off. Prior to then, that wasn’t something I could easily get away with.

Before JoJo, I drew Gorgeous Irene (1985), a series that also featured a female main protagonist. Nowadays, there’s a lot of works that feature women fighting, but back then that wasn’t something possible to do in a shonen magazine. So, I gave up on it and decided not to make it a full-length series.

Even though it was your own work, did you ever feel uncomfortable drawing a female protagonist?

I couldn’t draw action scenes at all. It was around the same time “Aliens” was released, and I liked Sigourney Weaver‘s performance as Ripley. I thought she was so strong and cool, and I wanted to portray something like that in my manga. However, I thought drawing a girl getting beat up was far too cruel.

Back then, I couldn’t draw thin eyebrows either. In those days, it was the norm for heroes in shonen magazines to have big thick eyebrows. Characters with thin eyebrows would often end up looking like villains. It was far too early to have a female protagonist in a shonen magazine. This was still the heyday of Stallone and Schwarzenegger. (Laughs)

However, fast forward 15 years, and now the times have changed. Now it’s okay to draw a scene of a girl taking punches. By then, I thought it was time that I could properly draw a tough female protagonist, and so I decided to make Jolyne the main character for Part 6.

For instance, when drawing female characters, do you start from the eyes, or is there a different process than that of drawing male characters?

There is no specific difference in the way I draw male and female characters. Rather, I like to use women’s poses as a reference when drawing. So I often end up drawing male characters by looking at the models in women’s fashion magazines.

Most of the time, the models in men’s fashion just stand around, while the models in women’s fashion are always doing interesting poses, like twisting their hips or bending their necks. It’s always interesting to the various ways in which they pose. The contours and skeletal structure of the models are obviously taken from different sources, but when it comes to posing, there is no difference between male and female characters. Both are usually drawn using women’s fashion magazines as a reference.

Then, how about fashion? Is there a big difference in fashion when you draw male and female characters?

That’s right. In terms of fashion, I think there’s a major difference between men and women. When I think up a character, I create kind of a portfolio for them. There are about 60 boxes in total, and by adding various details about them, such as their personality, habits, favorite foods, etc., the character becomes more and more three-dimensional and fleshed out, just like a real person.

When thinking about what to add, I rarely ever take into consideration whether they’re a man or woman, but I can’t help but notice the differences in fashion.

The fashion in JoJo has received a great deal of attention from readers. The flowers on Yasuho’s skirt, the thick chain on Jotaro’s school uniform, how did you come up with these creative details?

When looking for references, I often find myself taking inspiration from fashion magazines and such. Putting chains on a character’s clothing is, in essence, something that only exists in fiction. Obviously, you can’t go putting a chain on your school uniform. But, by doing so, it creates a suspension of disbelief and lets the reader know that they’re reading a manga. The same applies to the flowers on the skirt.

The fact that I can do this in a way that’s easy to understand is the reason why fashion is so interesting to draw.

Women are goddesses. They make the world a happier place…

Do you have an ideal heroine in mind?

I can never forgive the vulgar side of men, but if it’s a woman, I think I can let it slide. It makes me wonder if there’s a reason why. Given the current situation, I think there’s a lot more sympathy towards characters with flaws and imperfections than for those who are too well-mannered. For example, I think Yasuho, who is a bit troubled, will be a lot more interesting than Erina, who is like the Virgin Mary.

Araki-sensei, this might be a vague question, but what does a woman mean to you?

A goddess. One that makes the world a happier place. Is that wrong? (Laughs)

However, that doesn’t mean that I worship them excessively. But, they are goddesses in the sense that you have to treat them with proper manners and respect. So I guess it’s similar to the phrase “ladies first”.

That’s why I try to put women before me whenever something goes wrong unless it’s something serious. Most things go well in life when you live thinking of women as goddesses. At least, that’s how it is in my family. (Laughs)

Is it okay to have a vulgar side, even if you’re a goddess?

It’s okay. I mean, the women in Greek mythology are scary. (Laughs)

Zeus’s wife is very angry and jealous, isn’t she? But I think that’s what makes the story interesting. So I think it’s better to have a vulgar side. (Laughs) 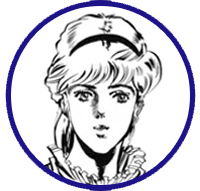 The heroine of Part 1. A well-mannered and educated young woman from a good upbringing. She’s the wife of Johnathan Joestar. When her first kiss was stolen by Jonathan’s nemesis, Dio, she had the gall to rinse her mouth out with muddy water. 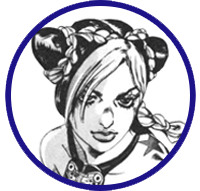 The first female JoJo protagonist, who appeared in Part 6. She is the daughter of Jotaro Kujo, the protagonist of Part 3. She fought against powerful opponents in order to retrieve her father’s stolen memories and Stand abilities. She’s tough and hardy, but also calm and composed. 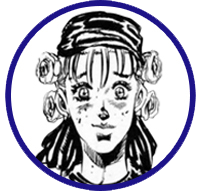 The heroine of Part 2. She first appeared as Lisa Lisa’s servant, who taught the protagonist Joseph Joestar the way of the Ripple. She has a joyful yet ditzy personality. Later, she marries Joseph after he survives a mortal battle against his strongest foe, Kars. 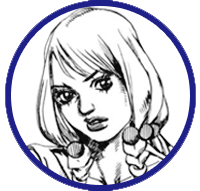 The heroine of Part 8. After rescuing the amnesiac protagonist, Josuke Higashikata, she helps him investigate and discover his true identity. She’s known for her trademark pigtails and skirt covered in flowers. She can be a bit emotionally unstable at times!

JoJo’s Bizarre Adventure was written by award-winning Japanese manga artist Hirohiko Araki. It has been in serialization for nearly 35 years since January 1987. It’s divided into eight parts, with the ninth part just announced. 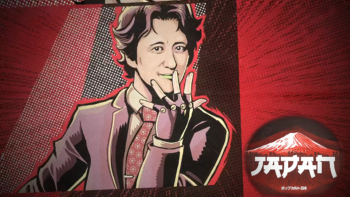 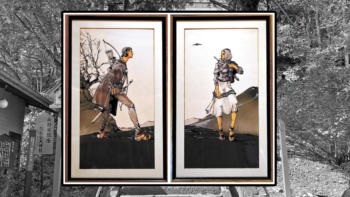