Researcher Explains the Science Behind DIO’s The World 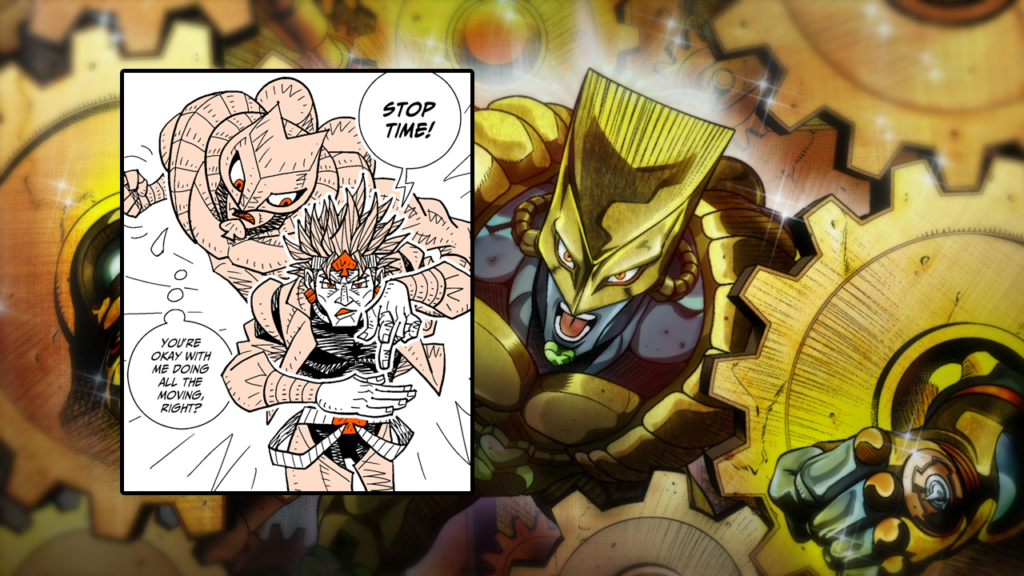 Japanese researcher Rikao Yanagita from the Dream-Science Laboratory posted a research report on Yahoo! Japan discussing the science behind DIO‘s iconic time stop, and how effective it would be in the real-world. DIO is a reoccurring character who appears as the main antagonist in the third part of the JoJo’s Bizarre Adventure series, Stardust Crusaders. His Stand ability, The World, is an extremely powerful Stand that has the ability to control time.

The World’s true power, as its name suggests, is to reign supreme over the entire world!

Can time actually be stopped?

To answer this question, we first need to ask what exactly we mean by “time”. The Oxford Dictionary defines time as “the indefinite continued progress of existence and events in the past, present, and future regarded as a whole.” And if you ask me, I’d say that sums it up pretty accurately.

But what is “time” in a scientific context? Well, according to the Dictionary of Physics, time is “one of the major factors for describing and expressing the events of natural phenomena.” In other words, it’s the way in which we measure and perceive the changes to everything around us.

So, using this definition, is stopping time feasible? The Special Theory of Relativity explains that objects moving at high-velocity experience time more slowly than objects at standstill; this effect is called relativistic time dilation. The General Theory of Relativity also explains that time passes more slowly in places with strong gravity; this is called gravitational time dilation. As such, GPS satellites orbiting away from Earth’s gravity need to take time dilation into account, as the clocks on them will be running slightly faster than those on the ground.

Using time dilation, it might be possible for DIO to slow down the passage of time by increasing the velocity of Jotaro and friends, or by increasing the gravity around them. However, I don’t think DIO is using this method, as to stop time completely using time dilation would require the same gravitational force as the surface of a black hole. And even if he did, time would still go normally for everyone in the outside world.

The Frightening Power of The World!

Enya the Hag put great emphasis on the importance of mental strength when it comes to stopping time, telling DIO that he needs to ‘believe’ he can stop time for it to actually happen. So let’s suspend our disbelief for a moment and assume that all it takes to freeze time is a little willpower, what would happen…?

According to the aforementioned scientific definition, if time were to stop, then all natural phenomena would stop, too. So if DIO stopped time, then all the air molecules around his body would also cease to move. For DIO to move, he needs to push these air molecules out the way, but since the air molecules remain motionless, he would be completely stuck in place. Even the simple act of pulling air in and out of his lungs would be impossible, causing him to suffocate instantly…

There’s also absolute zero, which is the lowest temperature on the thermodynamic scale, at which molecules and atoms stop moving entirely. It sits at zero on the Kelvin scale, which is equivalent to −459.67°F or −273.15°C. If time were to stop, then theoretically the temperature of everything else in the world would also be at absolute zero. However, in a world where molecules have stopped moving, there is no thermal conductivity, meaning DIO’s body won’t lose heat while in contact with the surrounding air. In other words, even though everything around him is −459°F, DIO won’t feel the slightest bit cold. How eerie…

What’s more worrisome is that if any additional heat is generated in DIO’s body, that heat won’t dissipate, causing his body temperature to quickly skyrocket. And since light can’t move to reach our eyes, the world would be pitch black! Sound waves, which are caused by vibrations in the air, would also be unable to be transmitted, meaning that everything would be in complete silence!

In short, stopping time would freeze your opponent, but you wouldn’t be able to move either. What a cruel world…

What if time is just moving slowly?

In the manga, DIO doesn’t appear to be stuck in one spot or suffocating, so maybe time isn’t being stopped all the way. Perhaps time is moving so slowly that it just appears to be stopped. For example, what if time were moving forward at 1/10000th speed?

In this case, DIO would be moving 10,000 times faster than he would perceive. The speed at which humans walk is about 4 mph, which means that DIO would be walking at 40,000 mph. That’s the equivalent of walking at Mach 33! With such incredible speed, DIO would have no problem overwhelming Jotaro and the others. However, moving through the air at this speed has two major drawbacks:

In conclusion, making time appear frozen without actually stopping it is very difficult, and in this case, extremely painful. But, DIO doesn’t seem to be affected by it, maybe because he’s the only one who can endure it. After all, Lord DIO is the chosen ruler of this world!!!

Rikao Yanagita dropped out from studying science at the University of Tokyo to become a full-time cram school teacher in 1991. In 1995, Yanagita wrote “The Fantasy Science Reader,” which applied scientific-sounding explanations to famous science fiction and fantasy characters. It became a national bestseller selling over 600,000 copies and Yanagita has made the book into a popular series since then.

Yanagita established the Dream-Science Laboratory in 1999. Nowadays, it receives over 10,000 questions a year. He has examined more than 1,000 manga, anime, games, and folktales, and actively posts videos on his YouTube channel KUSOLAB. Yanagita is also a concurrent lecturer at the Faculty of Science and Engineering at Meiji University.

One of the books he’s written is “The Science of Attack on Titan“, which has been published in English.